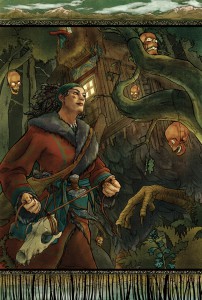 Just the other week, my first non-WW/Onyx short story was published, in Worlds Without Master #4. This week, I’m releasing four more.

The Sugar House is a collection of four short stories, each an episode in the adventures of Sasha Witchblood. Everybody calls Baba Yaga “grandmother,” but for Sasha, it’s the literal truth. She wanders a Europe being consumed by the forest, encountering wolves, thieves, and monstrous princesses. The overall idea is Robert E. Howard meets the Brothers Grimm.

This is a book near and dear to my heart. I’ve been writing Sasha’s adventures for a few years, and she’s probably the most interesting character I’ve created. She’s very different from my Vampire protagonists, and the world she inhabits is stranger and more lurid.

Sasha’s the product of me moving to Atlanta and rereading pulp fantasy and comic books. She’s also the product of me looking for heroines who aren’t either fetishized or aspirational. I want to write a heroic woman who just is, the way Conan just is. I want somebody shadowed with dark luck, like John Constantine. And I think I’ve found her.

For the setting, I wanted a deep and moody territory that didn’t rely on a lot of expository worldbuilding. I did a lot of working out setting elements and their relationships, but I’ve tried to keep that under the hood. I wanted the setting to primarily illuminate the character, the way the Hyborian Age brings out the most interesting traits in Conan or the Young Kingdoms reveal Elric’s nature. Sasha’s Europe is a place that I feel comfortable exploring, and which I want to leave open to exploration.

There’s a lot more that I could say about The Sugar House. I have a huge quantity of notes, and I’ve already written most of the sequel. But for now, I hope you’ll read it yourself.