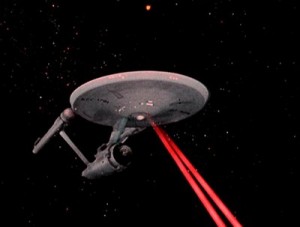 Here’s a first pass at a combat system.

Combat takes place on an eight-space, one-dimensional map made of range bands. Tokens on this range band face either forward or backward along the band.

Start of the turn

Each ship starts with two Maneuvers.

Players roll the helmsman’s Helm Control Skill plus the captain’s Leadership Skill, plus any ship Initiative bonus. This is their ship’s Initiative. Before the Initiative roll, the players can trade any number of dice for extra Maneuvers in the Movement or Action phases.

On a ship’s movement turn, the helmsman may choose to spend a Maneuver to:

The tactical officer may choose to spend a Maneuver to:

The engineer may choose to spend a maneuver to:

Weapons have different ideal ranges. They suffer penalties based on being fired at targets outside ideal range. Some ideal ranges are close in, like the disruptors on a Klingon Bird of Prey. Others are further out, like Federation phasers.

Weapons are fired with an Intelligence + Tactics roll.

Photon torpedoes and other missile weapons do not provide a bonus to attack. They deal a flat amount of damage on a successful impact. Missile weapons come in limited quantities. The quantity of missiles available to the player represents the total number of salvos the launchers can fire without need for ammunition resupply or launcher repair.

All weapons and shields are marked fore or aft. A ship may only fire weapons on the arc that directly faces the opposing ship, and may only hit the arc facing it.

Shields block damage. When a ship is hit, and it has shields remaining on that arc, check a number of shield boxes equal to the damage taken. Any leftover damage is applied to the ship’s system the attacker was targeting..

A player may trade one Speech die (see Speech) to recharge one shield box. You may do this as many times as you like. Alternatively, a repair roll (see Repair) can be made.

If a ship suffers three points of damage or more, and the shields don’t soak up all of it, the ship is Rocked. Each important crew member must make a Dexterity + Athletics check or be knocked prone. A prone character cannot take any action (moves, attacks, repairs, Speeches) on their next turn.

A character may make a Speech related to their job for bonus dice on the next turn. For each salient point in the Speech (up to five), they receive a bonus die to be allocated to a future, relevant action.

The player whose character made the Speech gets to distribute the dice. Speeches can help players who otherwise have a limited role during combat to get their due spotlight time.

A Speech does not cost a Maneuver, but only one player may make one per turn.

“You’re fine officers. / Every day I’ve served with you has been an honor. / Let’s make sure there are many more to come.” (3 dice)

“I’ve rerouted power to the secondary junctions. / That should free up the main batteries to give you more power to the impulse engine.” (2 dice)

Ships’ crews can make remarkable repairs in the heat of battle. Once per round (without necessarily spending a Maneuver), a player may pick a damaged system and roll his character’s Wits + Engineering.

If repairing the ship against Conditions, the repair roll counts as an escape roll against one current Condition.

If repairing the ship’s Structure, the ship recovers one box per success on the roll. However, unless a Maneuver is spent, no more than two boxes can be repaired at a time in this fashion.

If repairing the shields, the shields recover one box of protection per success on the roll. However, unless a Maneuver is spent, no more than two boxes can be recharged at a time in this fashion.

During a single ship’s Action phase, up to three normal character actions can be taken by the crew, and three by any opponents. These can include arguments (such as social checks), repair attempts (if the character is qualified), making escape rolls for Conditions, and engaging in personal combat.

If a ship takes two or more damage boxes while unprotected by shields on the appropriate arc, the ship receives a Condition.