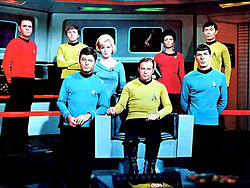 Willpower is an important part of my vision for running Star Trek. I’m a big believer in players having pools of magic beans that give them some control over when they succeed. Willpower is also a powerful feedback mechanism in the Storytelling system. In our conversion, it will provide reinforcement for following your character’s Values and Nature, as well as fuel for the Aspect system.

I considered renaming Willpower “Action Points,” as we did in the Storytelling adaptation of EVE Online. In that game, the goal was to make Willpower an entirely metagame resource, getting rid of the flimsy mapping between the idea of “willpower” and an increased ability to succeed.

However, I think I want to keep a flimsy mapping of that sort. Therefore, I’m going to follow the Last Unicorn Games version of Star Trek and call Willpower “Courage.”

Courage points will have a few more uses than in the World of Darkness.

As per Stew’s recommendation, these replace Merits and Flaws. Aspects are a concept borrowed from Evil Hat’s excellent FATE system. They’re character traits which can be positive, negative, or, frequently, both. Aspects cost a point of Courage to activate in a character’s favor, and give a point of Courage when used against the character.

I’m working on starship combat. While I don’t intend it to be a central feature of my chronicle, I want to have a distinct and fun combat system that imparts the feel of big, heavy starships crewed by specialists.

I think FASA’s system was really good, and easily the slickest part of their Trek RPG. However, I don’t want to use their hex-based positioning, or give two players (the science officer and the communications officer) heavy bookkeeping to do even on turns where their characters don’t take any action.

I’m starting from two places: first, an initiative and tactical positioning system inspired by AGON. Second, Ben “Bailywolf” Baugh once designed a neat starship combat system that split each “ship turn” into several “crew turns.” I like the idea of mixing lots of crew-scale actions in between large-scale ship maneuvers. As usual, I’m interested in any suggestions.

I’m kind of stuck on lifepath rules. I like the idea of charting out your character’s academy history and tours of duty (something that was cool in both FASA and LUG), but most Star Trek characters are specialists and I’m using a short skill list, which means each tour of duty would be something like “yeah, another helm job, pile on one more dot.” I’m thinking of taking a look at Traveller‘s most recent High Guard book and seeing if there’s anything inspiring in there.