Home »Uncategorized»The Power of Anything 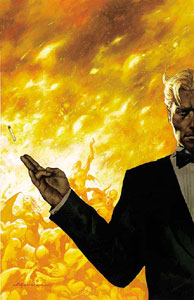 This was originally an e-mail to one of my regular brainstorming partners, but I thought I’d kick it to the group.

As part of my angel kick, I re-read Vertigo’s Lucifer. Lucifer is the adventures of the former devil as he tries to escape the predestination he believes has been inflicted on him by his father. It’s a neat combination of grand mythology, bastardly trickery, and street level stories about ordinary people getting mixed up in the supernatural.
Reading got me to thinking about one of the problems in roleplaying games that I’ve never been able to solve: how to handle characters whose powers are only loosely defined, like a lot of the characters in Lucifer and Sandman. In Sandman, Dream himself is well-modeled by Nobilis. He has the power to shape, create, and destroy dreams, and he has absolute control over reality within his own realm. Other characters are a little harder.
In his own series, Lucifer demonstrates the following abilities:
And others. The general problem with modeling him in a system is that these abilities seem to occur to Lucifer’s “player” on the spur of the moment. If one were running a game of grand mythology, it would work against the spirit of the thing to have made an absolute list in advance. It’s one of the problems with most games about gods and angels… the powers don’t allow enough on-the-spot effects.
Really, it seems like a game of higher powers should be defined in terms of two things:
So it seems like a game about higher powers needs some system for characterizing those powers without specifying individual abilities. The mechanics need to keep characters on theme more than provide a strict palette of options. And then some kind of a resource system that tells you how much you can do in the way of miracles and how much a given miracle costs.
Nobilis 3e, despite not being quite the right system for the task, seems to point the way.
In Nobilis, the area of reality a character has influence over has a list of Properties. For example, fire:
So the Power of Fire can destroy, has influence over rage, and so on. A list of properties for Lucifer as a character might include:
So from freedom, one might get the powers of flight and cosmic travel. From being God’s lamplighter, fire and shaping. From the Devil, the ability to levy small curses.
That leaves the question of how you do things. I like the idea that you have a large pool of dice per session, but there are two problems:
Perhaps:
Additional difficulty would apply if the effect you’re trying to cause doesn’t relate to one of your Properties.
And then there would also have to be physical combat, because what are angels if you can’t wrestle with them?
What do you think?

4 thoughts on “The Power of Anything”