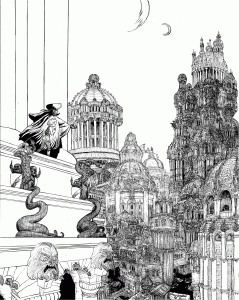 The City of Vance, illustrated by Chris Huth

What to say of the cities? After he bought me, my master brought me to Vance, where we lived modestly in a room above his favorite tavern. Despite his occasional protestations, I can think of no better place to have grown up. In Vance, the canals divide into a spiderweb of streams which serve as the city’s streets. At night, a thousand colored lanterns light the channels. The city refuses to sleep. In those late hours, a handful of chits can buy almost anything, though one must watch one’s purse closely. My master would often say that Vance is a city of thieves, yet I could say the same of any other city we visited. Perhaps it was the company we kept.

The Red Cities number some two dozen. Every one is located near some source of water. Thus, most are located along the canals, as Vance is. Yet there are a few outliers. Star-ruled Zodiac is an oasis within a great bowl of rock, which somehow traps the water from the pole with no need of canals. There, it even rains. In Ziggur, a place I shall shun and curse all my days, the people are rationed water that condenses within the atmosphere processor.

In any city, the majority of construction is stone and mud brick. Sometimes, this construction can be quite shoddy… my master told the story of being thrown through a third story wall in Chiaro.

Daily life is a struggle for all. No one is well-heeled enough to be certain where their next skin of water will come from. Every hand toils to earn food and water, whether attached to the arm of a laborer, a scribe or a sellsword. Still, better the cities than the sort of town I grew up in.

Traveling between cities can be difficult. Hire a boat down the canals, and you risk pirates. Desert thieves say the water pirates are soft; the two missing fingers on my master’s left hand put the lie to that. Travel overland, and you risk the desert thieves, not to mention the desert itself.

Yet for all that, the journeys are worth it. Few of the city-states are truly self-sufficient, and anyone who can trade or steal commodities in one to sell in another stands to earn more than their share of water.

Ah, but how to buy that water, or the knife you need to earn it? Each city manufactures its own money, backed at some level or another by rations of food or water. Most use ceramic coins or chits, treated in some way as to challenge the skills of counterfeiters. In Vance, for example, an iridescent glaze is applied; a similar technique is used in Zodiac. Illium’s coins give off a radium glow; I’ve used one to lure a mark down an alley on a dark, cold night.

The greatest quantities of both money and resources are naturally controlled by the upper classes, our supposed betters. Different cities have different aristocracies, ranging from Vance with its nobility of merchants and thieves to the theocracy of cursed Ziggur. Yet the divide between rich and poor is razor-thin, a fact of which every one of us is keenly aware. Thus, some of the wealthy are given to acts of extreme generosity, in the hopes that we will visit the same upon them should their fortunes turn.

In general, the people of Mars are given to grand gestures. We are keenly aware that we live in our planet’s last days, and so we weep and curse and love openly and with abandon.

This is true of no one more than the rogues of the Red Cities, a fraternity of which I have sometimes been a member. Gamblers curse their luck with the names of forgotten gods, while bravos seek satisfaction of one another in the streets and taverns. A slight against a hired sword can find a man with a handspan of steel protruding from his back. These rough characters inhabit the lower class portions of town, but are sometimes hired by the upper crust as bodyguards and assassins. Many times my master was hired by a young noble to fight a duel in his place.

Next: The Peoples of Mars

Today’s lovely illustration comes courtesy of the incomparable Chris Huth. Chris is doing a couple of pieces for Cavaliers, of which this is the first. You can find previous installments of “The Apprentice’s Tale” here.

1 thought on “Cavaliers of Mars: The Red Cities”