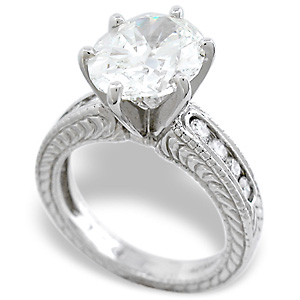 Diamonds are for Stealing

I’m back in the store. I’m returning the ring and, yeah, it sucks about as much as you’d figure. I’d known we’d had problems. I didn’t expect to get dumped. Not really. So I’ve waited until the absolute end of the return period. No miracle has occurred. I am back in the goddamned jewelry store, and I am admitting defeat.

The worst part is the bastard behind the counter. Middle-aged, olive skin and handsome as all hell. He sold me the thing in the first place. He gives me the look of a man who has never had to return an engagement ring but knew damn well I was going to have to. It’s a look that comes supersized with condescension and an order of pearly-white teeth.

So here I am, alone in the world in a jewelry store with perfect-teeth guy, a security guard and this hot, punky girl who’s probably turned down rings from everyone from Sauron on down. A girl that I am at this moment lonely enough to hit on but too crushed to try.

I mumble that I need to return the ring. Dude takes the bag, takes out the box, opens it up, and inspects it carefully. Yeah, he doesn’t just think I’m a loser, he thinks I’m a loser who might be defrauding him.

— Is there anything else I can do for you, sir?

Yeah. You can take that grin and shove it. You can get me back the love of my life. You can —

It’s the girl. The guard is down and she’s got his gun and she is pointing it in a way that suggests she’ll shoot.

He does what she says. I don’t blame him. I’d do what she said even if she didn’t have that gun. He clears out the register, he clears out the case. When he’s done, she takes the bag and no-shit roundhouse kicks him in the face. He goes down.

She looks at me, and under too much lipstick she cracks a smile. I’d like to go down.

I’m in shock. Which is why she gets out into the parking lot and to the door of her car before I run after her.

— What about my refund?

She blinks. She looks at the bag. The gun swings up at me.

— Ever been a hostage?

— Only in a bedroom situation.

— You get your money when we hit Mexico.

I look at her gas station attendant’s jacket, read off the name tag.

— Yeah. And you better start working on your Stockholm syndrome.

I look at her, and for the first time think that maybe I’m the crazy one.

She taps my nose gently with the barrel of the gun, then puts the car in reverse.