“Run and hide, because the monsters are coming — the human race.” 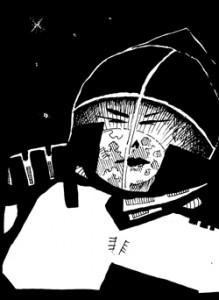 I don’t remember why, exactly, I ordered 3:16 Carnage Amongst the Stars. I may have read and liked the original, free version. I may have wanted to look at a “post-AGON” game design.

What I do recall is that I loved everything about it.

The game was honest and unapologetic about the “kill-happy machismo” of the power-armored-soldiers genre, as well as the frankly upsetting implications of playing death squads in the grim, dark future. Attack rolls didn’t deal abstract “damage,” they resulted in concrete kills. And the Flashback system seemed guaranteed to deliver the kinds of broken protagonists I so much enjoy.

Problem was, I couldn’t run it. The setting conceit I appreciated so much for its honesty, that the players were tasked with killing every living thing in the universe, was something I just couldn’t handle. I couldn’t play the NPCs who gave the orders to exterminate planets.

Either fortunately or disturbingly, though, I’m more than able to play a character who follows those orders.1 So one of my coworkers took up GMing, and I took on the role of Trooper Shiv, who would turn out to be almost as much a victim of the Terran military as the people he killed.

Our squad’s first deployment was to a planet crawling with acid spitting bugs. You know the type.  Hard to sympathize with. In the first few minutes of scouting, the PCs were ambushed and Trooper Shiv took a face full of acid. Checking off wound boxes on my character sheet, I saw that he was “crippled.” I decided that meant that he was now blind. By the end of the mission, he also had the last surviving brain-bug riding around in his head.

3:16 is a lot of things. One of them is a PvP game. Players end up competing for kills and promotions. Within one mission (which took four or five lunch hours), the most craven character had become an officer. Within two missions, it became obvious that if the Lieutenant’s right-hand man didn’t get him killed, the Lieutenant was going to get the squad killed.

The Lieutenant liked to put Shiv on point.

The campaign went on a good long while, for a lunchtime game — most of a year. Here’s what I learned.

The tactics/management game is tiny and brilliant. Like most combat systems, it probably couldn’t save an otherwise dull campaign, but it’s fun and you can actually play it over lunch.

Flashbacks are fun, especially since you unlock more of them as you advance. Your characters become progressively more capable of destruction while, in parallel, becoming more developed people. For my group, this was both unpleasant and hilarious. Early on, it was my favorite feature of the game.

Flashbacks are also frustrating. Using a Flashback requires you to invent both an anecdote and a character trait… and that character trait needs to be sufficient to either pull you out of danger or end a full-scale battle. I ended up abusing the system a bit, and having most of Shiv’s Flashbacks be “deleted scenes” from previous missions.

The GM has to play things fairly straight. A few Futurama-esque gizmos are alright, but the more humor becomes built into the setting, the less morbid and funny the troopers’ lives become.

Ultimately, 3:16 requires you to both find something kind of amusing about shooting everything that lives, but also be queasy with the idea that this is a good thing. It’s a game about doing the awful things that 40k assumes as a matter of course, and doing them as a job.

The moral lesson is obvious… unnecessary, even. But it’s a good one to work through once in a while. I work in video games, where success is measured in imaginary murders. Once in a while, it’s good to play a game that’s not asking me to be entirely okay with that.

In the year since our campaign wound up, I’ve often found myself thinking about 3:16. Should we play again? Should I be running this time? Having played the game more or less as written, I’m now a lot more comfortable making changes to the setting. Giving Earth a sympathetic reason to go to war, for instance, or putting troopers into literal hell in the fashion of the Doom series. But I don’t think I’ll ever be able to gloss over or forget what it was like playing not just the monsters, but the bad guys.

Carnage Amongst the Stars still carries some of the unease that I feel every time I see an FPS that involves mowing down the Other.

I’m glad that it does.

4 thoughts on “The War Effort”