Home »Uncategorized»Vampires are not ruined. Deal with it. 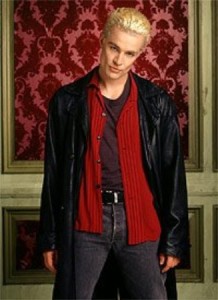 For my entire adult life… hell, my entire adolescence and most of my pre-teen years… I’ve been hearing that someone’s gone and ruined vampires.

Seriously, this has been going on since I knew what a vampire was. First, it was Anne Rice. Then Mark Rein-Hagen and his pretentious crowd of White Wolfers. Joss Whedon came along and messed everything up with Angel. And then Spike. Laurell K. Hamilton committed the atrocious crime of not skimming what happens between bites. Lately, Stephenie Meyer apparently made vampires too pretty in the sun.

The complaints are always the same. Vampires are supposed to be monsters. They’re supposed to be the bad guys. But some dastardly person has just come along and ruined them. Made them sympathetic. Angsty. Emo. Worse, girls like it. And it’s totally gay.

The worst part is that those of us working in vampire media have internalized it. White Wolf’s books have wasted a great deal of space trying to say that being a vampire shouldn’t be fun, that most vampires aren’t pretty, that “angst” is really the wrong word to be using.

We even turn on each other. I have too many con stories about people involved in vampire media bitching about Buffy or Twilight. We congratulate ourselves on how unhip and how evil our vampires are. We practically cackle about it.

This is a fucking embarrassment, even before you get to the gendered subtext. Ever hear anybody complain that Vampirella was too much of a goody-goody? Question the sexuality of Christopher Moore’s Bloodsucking Fiend? Say there was too much sex in Carmilla?

So, I’m taking a hard look in an empty mirror. I can’t promise to be a cheerleader for all things vampire (The Thirst really did suck), but I’m getting off the bandwagon of complaining that vampires are ruined every three years. And I’m not going to fill my books with little apologies for it being fun to identify with the monsters anymore.

14 thoughts on “Vampires are not ruined. Deal with it.”