Home »Uncategorized»Not as I do: Organizing an RPG
“What’s puzzling you is the nature of my game.”
— The Rolling Stones, “Sympathy for the Devil”

I’m looking at the structure of game books right now, and I really think (especially as someone who’s been doing it a while myself), that there’s room for improvement.

The default model seems to be:

Dungeons & Dragons conforms to this model through most of its books, though it often leaves the terrible advice and monsters to subsequent volumes. The White Wolf games pretty much all work this way, though the nWoD shunts questions of combat back to the core. 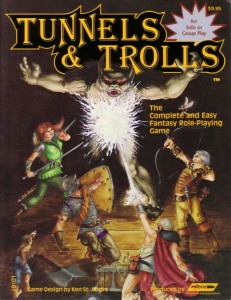 Other models have been tried. For example, Tunnels & Trolls 5.5 uses an interesting “expanding” structure:

So what you basically have is a simple example going through the first chapter, which nonetheless describes a complete model of the game. Then you get all the variations and exceptions. And then appendices of random additions you might or might not use. 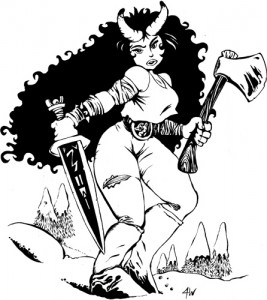 As a gamer, I prefer the latter two models, personally. While the “top down” manual style is a great way to do a design document, I’m not sure it’s much good for teaching a game.

As a designer, it’s unlikely that my game is going to be the one that teaches anybody how to game (if they learn on my game, it’ll probably be from an experienced player). But I am teaching the game to existing roleplayers.

The first structure is pretty good for existing gamers, because they’re usually looking for content and twists they can introduce into an existing gaming style. They already know if they’re going to do a dungeon crawl,2 a railroad,3 or an investigation game.4 Because that’s how they roll. They just need to know whether they’re calling the magic user a Tremere.

Okay, that sounds a little harsh, but I think it’s true. I also don’t think it’s a bad thing. A lot of gamers pick up new roleplaying games to provide content for playing in a structure they’re already set on.

That’s why a game like Trollbabe, whose major innovations relate to structure5 almost need to be structured as tutorials.

That said, as an existing gamer, I find it a lot easier to get through Tunnels & Trolls on a read than the Rules Cyclopedia.6 On the other hand, it’s rather a pain to go back through the “expanding” structure looking for particular references.

I’d like to see the rules treated multiple ways within a single book: the rules explained in expanding fashion, with explanations, examples, and designer notes, plus a quick reference in the back, covering the basic gameplay structure and procedures.

This is, in fact, sometimes how I run Trollbabe: with a “teaching copy” of the current edition and a “reference copy” of the original.

3 thoughts on “Not as I do: Organizing an RPG”