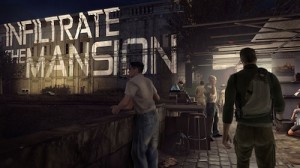 So, my housemate, Orrin, played through the demo of Rich Dansky‘s Tom Clancy‘s Splinter Cell: Conviction. For the moment, her observations hold more water than mine, but just watching her, I could see the writing on the wall. For her, it was all stuff like “INFILTRATE THE MANSION,” but for me, it was “POST MORE ON ENVIRONMENTAL NARRATIVE.”

Because this is something that’s worth talking about. You’ve got all this crap that’s going on inside the head of the character, and all this crap going on inside the UI (or on the character sheet) of the player. Generally, though, the environment doesn’t reflect any of this. If you’re lucky, you get some post-processing shaders to put everything in stoner blur (or the GM narration equivalent) when you’re dazed.

If you’re really lucky, you get one of those entire maps where you’re crazy, like in BioShock 2 or Velvet Assassin.1

Heads, HUDs, and types of action

Video games have been trying to push character and game state information into the 3d environment for a while. Dead Space and Ghostbusters both replace classic interface elements with animations on your character.2 The reduced screen clutter is supposed to immerse you more in our friend the environment.

Does it? I think it worked a little in Dead Space, but thought it was almost irrelevant in Ghostbusters. Seeing the character state on the character looked great, but it didn’t make me feel like there was any kind of focus on him or his world. It wasn’t his story, it belonged to the actual Ghostbusters, and that was okay. The game also did a good job of conjuring the environments from the first film, but didn’t share that film’s gift for evoking 1980s New York.3

And the environment in Dead Space was an impressively rendered rehash of other games, kinda like every half-decent remake of Aliens. Focusing on it more didn’t really do anything for me.

Splinter Cell, though, is taking one of my own personal demons (quest text) and marrying it to one of my personal fascinations (the dungeon, or, if you must, the level). Your environment doesn’t just tell you what you have to do… the tooltips for climbing and sneaking and peaking and all are projected into the environment, too.

In other words, the game takes a somewhat new approach to two things:

You find yourself looking into the environment for your goals and opportunities. Will Hindmarch says:

Conviction is all about putting you into the head of Sam Fisher, more so than his body. The game projects his thoughts onto the walls and surfaces of the game world, turning literal space into a figurative, psychological terrain at the same time.

That’s particularly interesting to me, because I think that the dungeon (electronic or imagined) is a landscape of psychological terrain.

The Dungeon as Psychological Projection 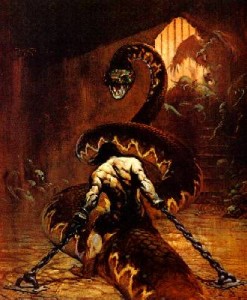 Conan beneath the Scarlet Citadel

Sometimes, that terrain is the designer’s headspace.4

Sometimes, it’s the hero’s. If you look at Quarmall, 5 or the Scarlet Citadel,6 you see environments that reveal the essential qualities of the characters therein.

The Scarlet Citadel reveals almost only what Conan brings in: old grudges, bold action, murderous ferocity, and a canny mind ready to exploit any weakness. And, yes, he fights a giant snake. Says it all, really.

Quarmall is more your “ecosystem” dungeon, with its giant slaves bred to pump the ventillation system, its halves controlled by warring princes, and ruling over all, its withered wizard-king. Here the Gray Mouser encounters charlatan wizards, and Fafhrd muscle-brained fools — both things they’ve been accused of being themselves.

Each also finds opportunities to showcase his most conspicuous qualities. The Mouser abducts a girl and attempts a spell, Fafhrd finds his romantic inclinations overwhelming his better judgment.7 And, of course, traversing the dungeons levels leads the two to reunite and perpetrate one of their own greatest scams.

So, if the dungeon is, in part, a projection of the hero who enters it8, is that something to consciously model in roleplaying games? It’s not hard to envision a mechanism for doing so, something like 3:16‘s flashbacks, only projecting into the environment, rather than exclusively the hero’s own past.

If I’m a little suspicious of the idea in a roleplaying game, I’m even more suspicious when it comes to MMOs. Do designers even have the right to tell a player what’s going on in their character’s heads? I’ve been told that an exclamation point is already a bridge too far. Should the character even be acknowledged as someone psychologically separate from the player, or is that just a legacy inherited from other sorts of games?

And if we’re facing the death of the character9, then is it acceptable to make psychological assumptions at all?