Become one of the beautiful and the damned in the definitive vampire roleplaying game! 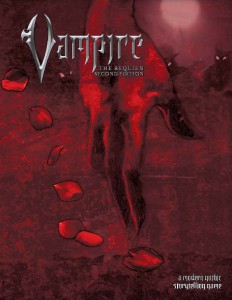 Tonight, you become one of the Kindred, the beautiful and the damned who hide behind our ordinary world. Driven by a hunger like fire, you will struggle to maintain your humanity while immersed in a vicious society of monsters.

But the sharks you swim with aren’t the only ones out there. Your Kindred are the smart, sexy vampires of pop culture, but you are haunted by the Strix — the grisly, demon-possessed corpses of folklore. They slaughtered the Night-Senate of Rome, drowned the tombs of the Princes of Alexandria, and warred with the Plague Lords of Transylvania.