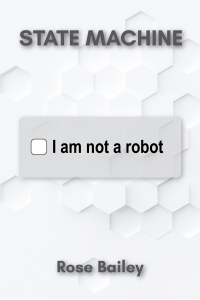 You are the ultimate human achievement.
But do you want to be human?

State Machine, my game of android espionage, releases tomorrow (Saturday the 29th of April) to subscribers of my Patreon. Here’s the full pitch:

You are the ultimate human achievement. An artificial intelligence who can think, react, and innovate faster than anyone around you. You live in the net as much as your own body… and what a body. It’s lithe or massive, flesh or steel, has limbs or treads, but whatever it is, it’s just as amazing as your mind.

You protect humanity. Protect it from its own base impulses, its own murderers and traffickers and terrorists. Sure, you answer to a human… but they’re a human who had the foresight to create you, so their judgment is clearly good.
Sometimes you cry at night, and you don’t know why. Sometimes you walk down the street and lock eyes with one of the dolls, the humanoid servants a quantum leap behind you. But the humans tell you there’s nothing there. No soul.
They’re not like you.

You get told to do things. Needed things. Violent things. Sometimes you have to be patched up afterwards, and by now there’s probably not a single part of your body that’s original. But then, it doesn’t matter. It’s just a body, while you are a glorious, shining mind

The missions get more and more frequent. More bad men to find, more malfunctioning parts to root out. Once, you hesitate a fraction of a second and lock eyes with one of the killers.