Home »Uncategorized»Whose Sin Is It, Anyway? 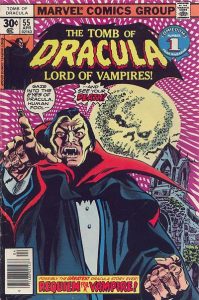 Dare You Enter… the Complicated Moral Question of Dracula?

One thing I’ve always been skeptical of in vampire media is the idea that vampires are better than you. There’s a certain tendency to present them as glamorous immortals. And that’s particularly true when you gloss over — or simply aren’t bothered by — their violent and cruel behavior. I had a gig once where one of my bosses was very determined that vampires should be presented as possessing all desirable material things… and within the fictional context of the world we were working on, he saw the violence and abuse as window dressing, the appropriate action of the powerful over the powerless.

That bothered me a lot. I write about a lot of bad people, and I don’t always give them their just desserts. But I never want to accept their negative behavior uncritically. One of the things that I value the most about working in vampire media is the ability to question power fantasies.1

You might think, after all that preamble, that I think vampires should be presented as unrelentingly base and vile, in order to get the point across about the abuse of power. I don’t, actually. I think that uncritically portraying vampires as worse than you or I undermines their ability to serve as mirrors that help us question our own actions. It’s the Sin City problem, wherein it’s pretty clear that the author doesn’t intend to endorse the behavior of the characters, but they take it to an extreme where it’s no longer relevant to the reader.2

For me, the core story of vampire-as-protagonist is about selfishness. Vampires represent our inability to survive without selfish actions, and throw into sharp relief the fact that putting ourselves ahead of others can be very harmful… but also necessary. In vampire media, we need to always ask the questions of what is justifiable, what is acceptable, what is reprehensible… and be willing to entertain answers that make our monsters neither angels nor devils.