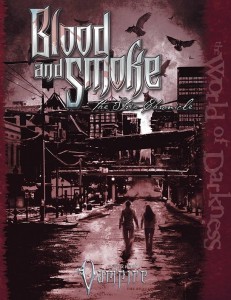 Demon: The Descent is a game of techgnostic espionage, where you play a rogue angel who’s defected to the human race.

Blood and Smoke: The Strix Chronicle is a standalone update to Vampire: The Requiem that revitalizes the game’s focus on visceral drama and personal horror.

Deeper personal reflections on these might be in order at some point. Demon is my game about the masks we use to get through daily life, the different identities we adopt with our family and friends. Vampire is my game about the difficulties of adult relationships, and what happens when they slide into exploitation.

I also stepped up as Onyx Path’s development producer, coordinating the schedule and all products in the manuscript process. That’s been an interesting road. While our project lifecycle is similar to that at White Wolf until the PDF/print stages, the work environment is totally different. For a company that’s spread out across the Western world, much less one composed mostly of freelancers, you have to take a very different approach to managing teams. I’ve learned a lot from software development here, and am continuing to work on refining the process.

Cavaliers of Mars is running late because of all the WoD and administrative work this year, but it’s moving along. The core system works, and merely needs some additional playtesting for recent tweaks, and sections of the corebook (like the bestiary) still need writing. Onyx Path is still lined up to publish it as our first creator-owned project.

I’ve been doing a lot of game hacking this year that hasn’t made it to Fantasy Heartbreaker. I’m not sure how I feel about that. I tend to get more feedback over on Google+, but I think people’s eyes glaze over faster when I start to get into detail. I’m rather attached to my blog, but when you’re doing game design, feedback is fundamental. For example, I got way more comments on my space opera hacks of Cortex Plus Action there than here.

My latest small hack is Mouse Guard to run a game in the spirit of Hero’s Quest/Quest for Glory. Mayhap I’ll post more on it here, but the G+ issue lurks there.

I don’t know if anyone’s still bothering to comment here after my long silence, but if so, what are your opinions on the social network/blog divide?