Home »Uncategorized»Fiction in, fiction out 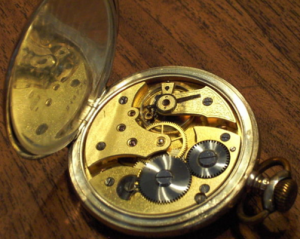 In traditional roleplaying games, most mechanics are both. The fiction “I attack that guy with my sword” goes into the mechanic “roll 1d20 to hit,” which outputs the fiction “and then he dies.” In older games (read: classic Dungeons & Dragons), the most common mechanics that are purely fiction-out are character generation and, arguably, experience gain.

More recently, we have games that encode a dramatic structure into the mechanics — Fiasco is a good example here. These games have some fiction-in mechanics, but more fiction-out mechanics. Purely fiction-out rules tend to look like this: “each player takes beans from the bag; the player with the most black beans narrates the beginning of the scene, and the player with the most white beans narrates the end of the scene.”

My current project, To Seek Adventure, has the players making a decision on each turn: do I narrate my character taking action, or do I narrate an event for the other player? The dice are then rolled, determining how close the scene is to resolving; unless a character falls, there’s no direct fictional output.

This pacing mechanic affects the fiction — if the scene doesn’t resolve, you narrate more action and events — but doesn’t output any particular fiction, such as “and then he falls over and hits his head and dies of of bleeding.”

At the same time, 2SA also has some purely fiction-out mechanics, such as the random plot hook draws that kick it off.

Relying exclusively on fiction-out mechanics can be dangerous: you run the risk of creating a clockwork story machine, in which the players’ fictional contributions affect very little. At the same time, most pacing or structuring mechanics are primarily fiction out, as are such techniques as random encounter tables. All things of which I’m a fan.

What games rely heavily on mechanics that are fiction-in/out, and what games go only one direction? I’d say Apocalypse World is a particularly pure example of the former… am I right? And how might this relate to narrative boardgames like Battlestar Galactica?

3 thoughts on “Fiction in, fiction out”