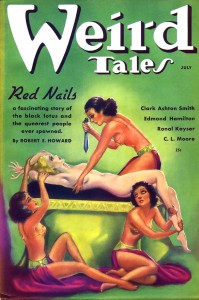 A Witch menaces a Heroine on the original cover for Howard's "Red Nails."

In the early era of sword and sorcery — that is, the era when Conan was being published but long before he became an icon — female sexual agency is rare, and female plot agency is rarer. Studying C.L. Moore, Clark Ashton Smith, Robert E. Howard, and the early stories of Fritz Leiber, I see five major archetypes for female characters.

Most of the analysis I see of sword and sorcery fiction, especially with regards to female characters, assumes a defensive posture. “I like this so I’m going to say why it’s okay.” By contrast, I’ll admit to being entirely uncomfortable with the portrayal of women in early sword tales.

I’m not going to conceal my biases, but I think I’ve said what I need to already. I also don’t have a particular thesis this time around; I’m simply assessing what’s there.

The strongest focus here is on Howard’s Conan stories, with the others used to illuminate what I find there. Were I, for instance, to analyze Leiber’s career, or even just those of his two famous rogues, this list would look very different. (Also note that the Leiber story treated here, “Adept’s Gambit,” was written within a decade after the other works, but not published until 1949.)

The most common role for women is as property. Often, this involves the woman being treated as property cruelly by one man, and then crudely but well by the hero. (“Iron Shadows on the Moon,” “The People of the Black Circle”). In this capacity, the woman has little agency; she is, by default, the sexual partner of whatever man currently possesses her. One of the best examples is “The Servants of Bit-Yakim,” in which Muriela changes hands with little ado, and is later valued directly against a cache of jewels.

Most of Clark Ashton Smith’s female characters fall within the property archetype, although a few surprise the male characters by displaying agency of one kind or another.

As property, a woman may possess sexual allure, but rarely posseses sexual agency. She’s also more a plot device than a character with plot agency.

The mysterious woman is essentially a transitional archetype. A woman begins as a mysterious character, during which time she’s sexually off-limits (although possibly quite alluring). So it is when Yasmela first appears in “Black Colossus,” and with Ahura in “Adept’s Gambit.” Muriela occupies this role for about five minutes in “The Servants of Bit-Yakim.” One of my personal favorite mysterious women is Clark Ashton Smith’s eponymous “Morthylla.”

The mysterious woman is a well-established trope in other genres, but only occasionally seems to appear in sword and sorcery. She’s most frequently found in Leiber, who was fond of the idea of women as alien to men. (See also “The Girl with the Hungry Eyes” and “Conjure Wife.”) Leiber’s alien woman is arguably an archetype all her own, but going down that road involves abandoning the discussion of sword and sorcery as a whole.

The Conan stories, as well as Jirel’s saga, have a number of examples of women who wield authority, and wield it effectively. Few of them, however, really want to.

There’s the Devi Yasmina, for instance, the most capable female leader in Conan’s saga. “The People of the Black Circle” presents her as a clever diplomat and brave as any of the male supporting cast in the face of uncanny horror. She’s also at least a passable military commander, rallying her troops to the aid of Conan the chieftain. But she has no true desire to rule; rather, it’s an unpleasant task forced upon her by the assassination of her brother. Yasmina is largely an object rather than an agent in the plot — woman as property — but has a fair amount of sexual agency. She essentially negotiates with Conan whether or not they will have an affair, and on whose terms.

Yasmela of “Black Colossus” is another capable female leader, but again, she leads only because she lacks a brother. (Hers being tucked away in a dungeon.) Yasmela has plenty of plot agency early in the story, and sexual agency at its end. She’s probably the only female character in Conan’s history to persuade him to have sex in direct contradiction to his initial inclination.

In “A Witch Shall Be Born,” Taramis rules without any missing male authority. She’s also presented as a just and beloved ruler, whom a number of men not interested in her sexually willingly follow. She’s perhaps the standout female authority of the Conan stories. Of course, the contrast between her and her sister, Salome, is perhaps the only outright “madonna/whore” juxtaposition in Howard’s work.

Belit, the “Queen of the Black Coast,” is a strong authority figure. Strong enough, in fact, that Conan is content to follow her leadership and play the role of consort. Ultimately, however, she’s also an overreaching authority figure, a Pandora or Ahab who leads her men to death. Notably, Belit seems to have been forced into her role of authority because her male relatives were deprived of theirs.

And then there’s Jirel of Joiry, her own little special case. She’s the military commander of Joiry, and her men are extremely loyal. Little attention, however, is given to the nature of her rulership or how she got there. She simply is, and is unquestioned.

Most of these characters possess some sexual agency of their own, often with the ability to choose and even compel lovers. Their plot agency is also strong. Many of them set significant events into motion for their own reasons.

The witch is primarily an antagonistic figure, with some crossover with the mysterious woman. Examples include Salome (“A Witch Shall be Born”), Akivasha (The Hour of the Dragon), Ahura when possessed (“Adept’s Gambit”) and the parallel figures of Thalis (“The Slithering Shadow”) and Tascela (“Red Nails”). These characters possess some measure of power over the hero’s survival, and are usually depicted with sexual freedom. Their plot agency is variable but tends to be significant.

The mightiest of these is Jirel’s foe Jarisme (“Jirel Meets Magic”), queen of her own otherworld. Jarisme presents one magic obstacle after another for Jirel to overcome. She’s the perfect impediment to meet Jirel’s plot-driving fierceness. Indeed, her only role in Jirel’s life is as an obstacle. Jirel battles and kills Jarisme while seeking to murder another wizard entirely.

There’s a ton to be written on this topic, but I’m not inclined to at the moment. I’ll note that later creators refine this archetype into the mighty Sorceress, from which figures like Zorayas (Night’s Master) spring. It’s also worth noting that I’ve seen the witch called the “temptress,” but it’s a misleading label. In the works I’m discussing, there’s little to no temptation of the hero, however much a character like Thalis might wish it.

There’s also the literal witch Zeiata (The Hour of the Dragon), who’s notable for being one of the few old women present in the Conan saga.

Jirel is the only starring heroine I’ve read from the original Weird Tales era. She possesses most of Conan’s personality traits, save for his ambition. She has some sexual agency, in the sense that she actively denies men who want to compel her to be their lover. She also has a lot of plot agency. Her fierce determination drives her stories more than anything.

Jirel, however, must repeatedly fight to avoid being property, sexually or otherwise. Most of the Jirel stories feature a sequence which revolves around her imprisonment by either force or sorcery. She achieves freedom through her own fierce nature, usually when her considerable physical prowess has been neutralized. Fighting to achieve freedom is the most consistent theme in Jirel’s stories, and usually is what propels the narrative forward. In that sense, she’s made of plot agency.

Belit qualifies, however narrowly, for the heroine archetype. We’re told she’s a fierce warrior; we just don’t see most of it. Her plot agency as a heroine is somewhat less than her agency as an authority figure, but the two are appropriately difficult to untangle.

Valeria of “Red Nails” is an excellent heroine, supporting character though she is. She has the freedom to choose lovers and deals harshly with those who try to take it away from her. Her plot agency is pretty strong; she takes almost as active a role as a fighter and explorer as Conan does, and her backstory implies that she’s accomplished much more.

The ability of these heroines to make their own sexual decisions puts them in interesting contrast to their descendants. The most notable of those, of course, is Roy Thomas’s Red Sonja. Sonja’s made of headstrong plot agency and sword-borne death, much like Jirel. However, her sexual freedom is a foregone conclusion. She’s under magical obligation never to have sex, so there’s never any question what she’ll do with an interested male character. 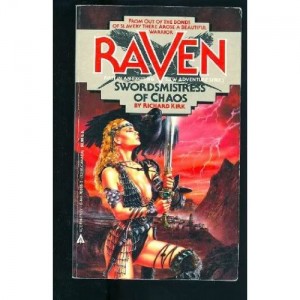 The archetypes above are both icons of the classics, and reasons for us to stand back and call bullshit. Perhaps even more so than the pervasive racism of the era, the female archetypes are defining elements of the genre… and for that, simultaneously classic and nauseating.

As a writer and a gamer, that’s hard to come to terms with. Can new work be recognizably a part of the genre without adopting its less pleasant icons?

Today, Valeria-begotten Sonja1 herself has descendants and reimaginings, as have most of the characters mentioned above. In today’s fantasy, which of these archetypes still hold sway? How have they changed with the passing of years, and what new ones have arisen?