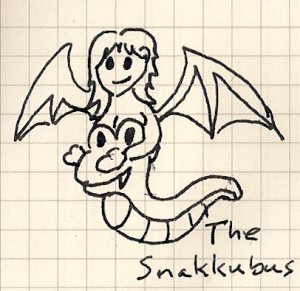 While there are varying reports of whether or not she is a single creature or a community, most adventurers agree that it’s unlikely an entire tribe could have such fantastic… eyes. The snakkubus can take the form of a beautiful female human or elf, but doesn’t, because she has a positive body image.

1 thought on “Know Your Monsters: Snakkubus”