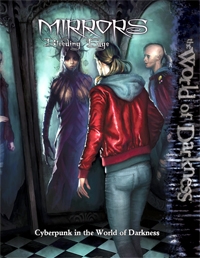 “World of Darkness with Bleeding Edge is definitely the best cyberpunk game I’ve seen (admittedly, I haven’t gone looking very far), and I’d probably go as far as to say that it’s the only game that gets me for the same reasons that I like cyberpunk novels.”

White Wolf’s just released my cyberpunk rules for use with The World of Darkness. In Bleeding Edge, you get new mechanics for incorporating your character’s upbringing and career, rewards for loyalty and betrayal, and of course, Plugins.

Bleeding Edge and its companion, Chuck Wendig’s Infinite Macabre, are currently the top sellers on DriveThruRPG, and I’ve been thrilled with the reaction. Thank you.