Home »Uncategorized»The Encounter with the Uncanny 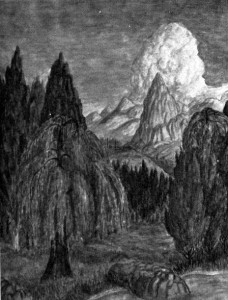 The encounter with the uncanny is a foundational, though not ubiquitous, convention of sword and sorcery fiction. In it, the protagonist witnesses something which should not be possible according to the reader‘s worldview.

The classic encounter is with an unnatural creature. This is typical of Howard stories, for example, in which the hero exists in a loosely historical world1, but encounters monsters from outside the historical milieu. The hero has a series of puzzling hints of the supernatural, and then witnesses it directly.

Travels into the otherworld, as presented by Clark Ashton Smith or C.L. Moore, are not necessarily encounters with the uncanny, although the encounter may occur in the otherworld.

Whether or not the encounter is strange to the protagonists is irrelevant. In Fritz Leiber’s stories of Fafhrd and the Gray Mouser, for example, the characters often deal wryly with the strange.2 Conan is rarely impressed with the demons he dispatches.3  What matters is that the encounter is weird to the reader.

The reaction of the characters is secondary, but not totally irrelevant. Much like horror protagonists of the same period, heroes are often given to whimsical or phantasmagoric speculation when faced with the unnatural. Heroes, on the razor edge of wonder and fear, see the same half-formed and eerie ideas that we see when we look down the stairs into a darkened cellar. Critically, a hero’s speculation is usually half-right at best.4

Sword and sorcery5 diverges sharply here from high fantasy. High fantasy heroes typically have strongly formed ideas of what they do and do not know. That is, a hero might shiver at the unknown, dark shapes passing on the road ahead, but he will not speculate that they resemble a caravan of dead souls, walking eternally in search of their final rest. Not unless he has good reason to believe such a thing is possible.

The divide between the hero’s perspective and the reader’s perspective is critical, because it meaningfully separates the presentation of the encounter in sword and sorcery fiction from its cousin in horror fiction. In horror, the protagonist is typically more surprised and dismayed by the uncanny than the reader.

A common aspect of the encounter is the tease — hints at the supernatural set piece dropped throughout the story. These moments are where the reader speculates as to what lurks ahead, and perhaps pulls back a little, while the hero pushes forward towards his goal, with perhaps a thought spared for morbid and melancholy speculations.

The encounter with the uncanny is not necessarily the story’s final or climactic moment. The encounter is part of sword and sorcery’s shared heritage with horror, but one of the lines dividing early sword and sorcery from horror of the same era is that the plot doesn’t necessarily hinge on the revelation of or confrontation with the supernatural. Often, the revelation of the supernatural will drive the final conflict between the hero and human antagonists.

While a story may contain a number of supernatural elements, there’s usually only a single full on encounter. As I’ve noted before, a sword and sorcery monster is the hook and the line upon which the plot is reeled in. No surprise — not only does a single strong uncanny element hit harder than a profusion of the weird, but a good monster or horror was often the commercial selling point of a story. In a pulp magazine, a naked girl might get you the cover, but a half-described horror would be your slug in the table of contents.

(I will, in the near future, follow this with an article adapting the subject to gaming. For this article, however, I wanted a hard focus on literature.)