Home »Uncategorized»Where to start with Fafhrd and the Gray Mouser 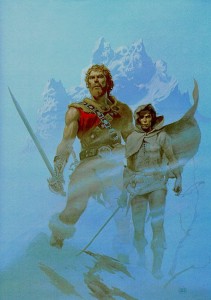 Fafhrd and the Gray Mouser

Beginning in 1970, Fritz Leiber’s tales of Fafhrd and the Gray Mouser were collected in the Swords series. The stories were ordered and combined with new material to tell the story of the heroes’ lives, from callow youths to middle-aged men.

For Leiber devotees, this is great. The stories were ordered and revised by the original author, avoiding the ungraceful and sometimes bizarre indignities inflicted on Conan when his adventures were put into biographical order.

I’ve seen it stymie new readers, though. The core appeal of Fafhrd and the Mouser is two swordsmen back-to-back against magic and death. Their early years aren’t as exciting if you don’t know who they become.

With that in mind, here are my recommendations for the first stories to read in the Swords books:

Part One: Swords and Hearts

Fafhrd and the Mouser’s meeting, their loves and losses, and their uneasy life in the City of the Black Toga.

Swords Against Deviltry
Also reprinted in White Wolf’s Ill-Met in Lankhmar and Nelson Doubleday’s The Three of Swords.

Swords Against Death
Also reprinted in White Wolf’s Ill-Met in Lankhmar and Nelson Doubleday’s The Three of Swords.

Swords in the Mist

Also reprinted in White Wolf’s Lean Times in Lankhmar and Nelson Doubleday’s The Three of Swords.

The stories suggested above should be about the length of one ordinary book.

If you enjoy those, any of the rest of the series is worthwhile. However:

Swords of Lankhmar, (also collected in Return to Lankhmar) is a proper, full-length novel, a hilarious swashbuckler with great characters and fantastic locations. If you’d rather start with a novel, this is the one… but it also separates the heroes for much of the book, so it’s not a perfect introduction. I’d read it either just after the stories above, or just before.