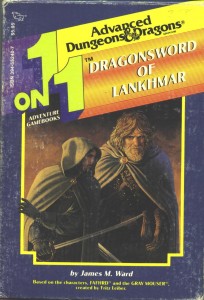 (This one’s for Ethan, Justin, and Srith.)

Fritz Leiber’s Fafhrd and Gray Mouser are the definitive fantasy heroes. I love Conan and Bilbo, but my heart will always belong to two half-mad rogues fighting their way across the roofs of abandoned temples, stumbling their way down Cheap Street, or sailing to the edge of the world with a Mingol crew.

Leiber’s heroes are one of the main reasons I got into Dungeons & Dragons in the first place. My first D&D product was James Ward’s Dragonsword of Lankhmar gamebook set.

One of my best campaigns ever — the Adventures of Hackan and Marek — was a steampunk buddy fantasy directly inspired by the twain. We used the D&D 3rd Edition rules. Or parts of them, anyway.

Yet, no edition of D&D has modeled them particularly well. The builds presented in places like The Dragon and the various Lankhmar campaign settings required hacking the system. You needed some levels of thief, some levels of fighter, a sprinkling of Wizard. In fact, it’s the Mouser who suffered the worst1.

Trying to fit his smattering of magical training into the Advanced Dungeons & Dragons magic system — much less the class system — appears to have vexed many TSR authors over the years. The Mouser used magic from time to time, but it was almost always under Sheelba’s instructions, as in “The Lords of Quarmall.” He accumulated magic books and trinkets in “Adept’s Gambit,” but for the most part couldn’t use them — if, in fact, they did anything at all.

Arguably his most important spell, when he chooses the path of black magic in “The Unholy Grail,” is a spontaneous ritual. And for the rest of his life, he never does it again — perhaps with good reason. Skinning AD&D or my beloved Rules Cyclopedia for got awkward fast.

Once you spliced sheets for Fafhrd and the Mouser together, it was difficult to actually play them. They had to start at advanced levels to capture their knack for survival and allow them those extra classes. High levels plus multiple classes meant they couldn’t level up at the expected rate of D&D heroes.2

3rd Edition fixed some of this. While the rogue class was diluted by thieving abilities becoming skills anyone could take, the twain became relatively easy to model as fighters. The Mouser got along well enough with Use Magic Device, or a level or two of sorcerer.

Still, D&D characters started a bit flimsy for our boys, and there was a new problem: magic items. In the d20 system, balance between heroes and monsters relied on, among other things, those heroes being equipped with enchanted gear.

Which brings us to 4th Edition. The ups and downs of the game have been widely debated, but in my estimation, it’s the first D&D that can build Leiber’s rogues right, and have them play like you’d expect, from first level. So, let’s do it. 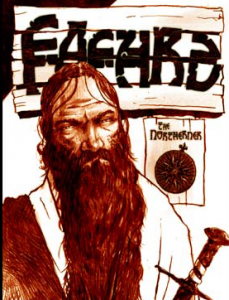 Brash, red-haired, and secretly in love with civilization. Fafhrd is a fighter, drawing the attention and anger of his foes and then spilling their guts across the floor.

First things first: we’ll be using the Inherent Bonus option, so that both of our heroes gain bonuses as they level without magic weapons or gear. After all, they live by what steel they can steal.

I’m often annoyed by the “raging barbarian” archetype, since it doesn’t fit most of the great barbarians of fantasy literature very well. Even Thongor was fairly clever and cool-headed. When Fafhrd rages, though, as he does in in “Lean Times in Lankhmar” and Swords of Lankhmar, he absolutely cannot be ignored. GIVE ME THE JUG, indeed.

Thus, we choose the battlerager fighter build. Fafhrd’s sturdy, too — Death lends the Mouser some of his strength in “The Mouser Goes Below,” yet he’s still up for a romp with Frix and her airship’s entire crew. Battlerager Vigor, then, is appropriate, leveraging that tough Constitution into temporary hit points when up close to something that needs hitting.3 Battlerager Vigor also favors Fafhrd’s preference for light armor, rather than the heavy stuff used by more knightly PCs.

But wait, it gets better. Battlerager Vigor also gives Fafhrd a +2 damage bonus when using an axe… like that hand-axe he’s been known to throw into a fray. That mitigates 4th Edition‘s bias against fighters using thrown weapons, but it still doesn’t make it an ideal attack, just a good supplement. Perfect.

Leiber’s battles are swift-moving, swashbuckling affairs, and so too the heroes. Thus, we’ll pluck the Combat Agility class feature from Martial Power 2.

We’ll give him a background of Geography – Mountains, getting him the Athletics skill he demonstrates as a climber. He’s been known to talk big to his enemies, so he’ll train Intimidate. As discussed above, his favored abilities will be Strength, Constitution, and Dexterity. Even early in his career, he takes quickly to the streets of Lankhmar, adding the Streetwise skill. And if the Mouser should fall and start making death saves, Fafhrd will be there to back him up and haul him out of trouble — Heal.

Fortunately, we only have to worry about two feats. Improved Vigor makes battlerager powers more effective, and Don’t Count Me Out bumps up most of his saving throws — fairly important in a two-man party.

Equipment’s straightforward: Graywand’s a longsword, Heartseeker’s a dagger, and we add on that light axe to round things out. 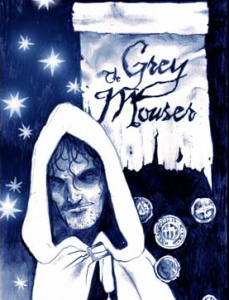 The Gray Mouser by David Petersen

Quick-witted, slippery, and not-so-secretly in love with himself… as well as any passing dark-haired girl. The Mouser is a rogue in name and class, as adept at slipping into palaces as at taunting and outmaneuvering his foemen.

The Mouser is a trickster rogue, and uses Cunning Sneak tactics, which let him stay hidden even while moving rapidly. His Rogue Weapon Talent makes Cat’s Claw deadlier than a dirk in the hands of a lesser man.

From his days as Mouse, the wizard’s apprentice, and his dark departure from that life in “The Unholy Grail,” the Mouser gains the Arcane Refugee background, and thus, the Arcana skill. That’ll give him good insight into magic and occult circumstances, as he demonstrates in “The Unholy Grail,” “Adept’s Gambit,” arguably Rime Isle and dubiously “Lean Times in Lankhmar.” Arcana will also help with those magical trinkets.

Abilities are simple: Dexterity to be nimble and Charisma for a tricky tongue. Skills are Thievery, Streetwise, Acrobatics, and Bluff — all staples of the Mouser’s adventures. He gets Perception, too — he’s sharp, even if he doesn’t act immediately on prickling suspicions.

Remember how I said Dungeons & Dragons doesn’t do the Mouser’s magic right? Well, 4th Edition has a ritual magic system, and the former apprentice can take the Ritual Caster feat in order to use them, using his Arcana skill. He also takes the Weapon Proficiency (Rapier) feat.

Now, we just need to add Scalpel (a rapier), Cat’s Claw (a dagger), and a few thieves’ tools.

Skill Challenges provide lots of opportunities for Fafhrd and the Mouser to work non-combat scenes together (as in the duel in “The Lords of Quarmall”). A liberal interpretation even allows them to combine their efforts unknowingly from different locations (Swords of Lankhmar, “The Lords of Quarmall,” “The Frost Monstreme” and more).

At level 1, Fafhrd and the Gray Mouser are ready to take on the challenges of “Ill Met in Lankhmar,” before traveling the breadth of Nehwon (and gaining some levels) in “The Circle Curse.”

Most of the twain’s foemen also model well in 4th Edition. Anyone interested in seeing me adapt “Ill Met in Lankhmar?” Or another of the twain’s adventures?

14 thoughts on “Swords Against Systems”