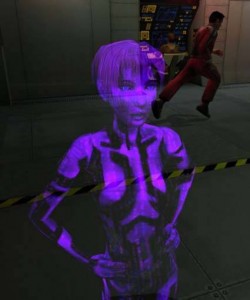 You’re in a maze of twisty little passages, all alike. The enemy’s right behind you. Looks bad. But then you hear her.

“I’m reading a weak wall up ahead. If you can hit it with a rocket, you might be able to get through to the generator room.”

Her voice is pleasant, light, feminine. Occasionally she’ll have an accent, and if she does it’s probably British. One part the operator from The Matrix, one part Majel Barrett’s computer voice from Star Trek. She’s there to guide you through every convoluted mission objective, relay plot we don’t have a cutscene budget for, and in general make sense of your crazy life of demons and shotguns.

There are dozens of her by now, if not hundreds. Cortana from Halo, Anya from Gears of War, Tannenbaum from BioShock, Juno from The Force Unleashed.

But who is she, and why do we need her?

She’s often a scientist or military type, but, then again, in a lot of games everybody is a military type. Generally geeky, or just a touch sarcastic. Every once in a while she’ll laugh with you at your shared predicament, before she goes back to crystal clear guidance. She might even flirt… but for the most part, your love must remain not only chaste, but unstated.

If you’re betrayed, then some way or another she’ll go rogue with you, hacking security systems and forwarding intel. She’s clarity and purity in a world of gritty browns, blinding bloom and flying bullets. She’s part character, part UI function, a voice you can always trust.

Almost always. One of the earliest intercom girlfriends actually subverts the trope. System Shock 2 paired you with Dr. Janice Polito. At first, she does everything right: saves you from a hull rupture, runs you through the tutorial, tells you what checkpoints to hit. But partway through, she turns out to be a mask for the villain, SHODAN.

This is such a classic twist that it’s reused almost beat for beat in BioShock, which takes the unusual step of giving you an intercom boyfriend: Atlas, later revealed as Fontaine.

Most of the time, though, your girl’s faithful through thick and thin. Sure, she’ll static out a couple times, and in some games her advice is more annoying than helpful, but her heart’s in the right place and her voice is in your ear.

Truth is, we need her. As game set pieces become faster paced and more visually complex, we need that voice from the heavens to help us find the next switch to flip, the next wall to blow up.  I said it before: she’s half character, half interface, and that’s a necessary role.

In the process, though, she’s become the most common female character in video games, more ubiquitous than the battle babe or the damsel in distress. She’s not a “strong” female character, really, but she gets excused from most of the bullshit strong or weak characters get subjected to.

So tonight, wherever you are, raise your glass and set a drink aside. Let’s celebrate the intercom girlfriend in all our lives.