Home »Uncategorized»Say you want a revolution
“I’d start a revolution, if I could get up in the morning.”
— Aimee Allen 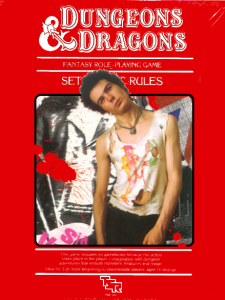 I work in roleplaying games, full time. Not many people do. I won’t forever. But you’re not getting these dice back. This is my hobby, and it’s in my blood.

I know the industry news sounds grim. Nobody wants to hear what happened to Catalyst. We didn’t want to see what happened to West End Games, either. And I thought it was pretty much bullshit when I heard Ursula Vari was out of Shiny Toy Guns.

But that’s life. You spend it chasing one dream, and then you have to find another. As the original punk said:

When King Numedides lay dead at my feet and I tore the crown from his gory head and set it on my own, I had reached the ultimate border of my dreams. I had prepared myself to take the crown, not to hold it. In the old free days all I wanted was a sharp sword and a straight path to my enemies. Now no paths are straight and my sword is useless.1

I’m a fully second-generation designer at White Wolf, someone who grew up on Vampire and the Rules Cyclopedia, working in one building with old school giants and new wave maniacs. Kinda like that kid who sings for Journey, the one they found on YouTube. I’m a middle school gamer, and no mistake.

And, well, things have changed a lot since middle school. The industry went and died messy in the bathroom. No one’s sure who really killed it, like Nancy Spungen, or the chauffeur in The Big Sleep.

Roleplaying games, though, are a lot like punk rock. There’s always going to be some kid in the garage reinventing them. Forum roleplay, small press RPGs, old school revolution. There are always going to be people who want to rage against machines and publish zines, and if they’re on Drivethru and Lulu instead of the corner gaming store, well, that’s change for you.

There’s always going to be somebody to pick up an old Sex Pistols album and find the turntable to play it on and say “fuck, I want to do this, but I want to make it mine.”

That’s who we are. Punks, dreamers, and precious little messes.

Say you want a revolution? Then start rocking.2

4 thoughts on “Say you want a revolution”