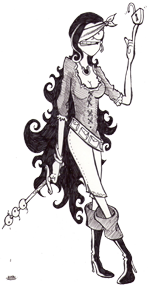 The Thief, by Max Brooks

The thief is centered, well-meaning, and devoted to the common good, spreading enlightenment by the lightening of purses. Not without commercial skills, however, the thief has a nose for gold and a touch to match.

Where other adventurers laugh in the face of danger, the thief smiles at the back of danger’s head, then cracks it with a blackjack.
Prime Attribute: Dexterity, 13+ (5% experience)
Hit Points: Constitution + ((1d6 + 1)/level)
Attack Modifier: -1
Armor/Shield: The thief may wear any armor or shield, particularly when trying to get out of town disguised as the fighter. To use thief abilities, however, a thief must be wearing armor no heavier than leather.
Weapons: Thieves may use any weapon, but use of their thieving abilities restricts them to one-handed weapons (including one in each hand) or a short bow.
Swashbuckler: So long as the thief is wearing ‘light’ armor (no heavier than leather), is not using a shield, and is not using a large weapon, the thief gains a -2 bonus to AC.  Also, when using two weapons the thief gains a +2 to hit.

Second Chance: When an ordinary adventurer would fail at any of the following activities, the thief may make a saving throw roll with a +2 bonus to succeed.

Surprise Attack: Most characters surprise on a roll of 1 or 2 on a d6. If this fails, the thief may make a saving throw to surprise anyway. In addition, any successful attack the thief makes during the surprise round automatically inflicts a critical hit. This is known to hurt.
Find Treasure: On a roll of 1-2 on 1d6, the thief can find a hidden cache of treasure.

2 thoughts on “Another (back)stab at a thief”